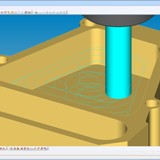 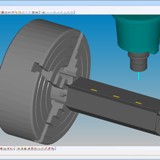 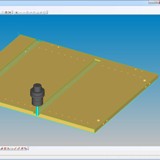 A number of new and improved functions in ALPHACAM CNC software – including a revolutionary high-speed machining technique – give manufacturers a competitive edge by allowing them to maximise the potential of their cutting machines.

ALPHACAM 2012 R2 is the latest release in the market-leading CNC software’s ongoing program of development and enhancement. General Manager Nick Spurrett says: “These latest updates ensure ALPHACAM not only keeps pace with the changing needs of manufacturers throughout the world, but also delivers maximum return on investment.”

The main addition to this latest release is a new Waveform 3D Roughing Strategy, which is a high speed machining technique that maintains a constant tool cutting load by ensuring the tool engagement into the material is consistent.

The tool moves in a smooth path to avoid sharp changes in direction, maintaining its velocity and can dramatically decrease the machining cycle time.

This strategy is superior to the traditional Roughing cycle where machinable geometry features are offset – inward or outward – by a stepover. Traditional tool paths have to run slower feeds and speeds because of the variable width of cut conditions encountered in corners. Tool load spikes as chip thickness increases in areas where the tool finds more material than it did while cutting in a straight line.

Amongst the other new and improved functionality in ALPHACAM 2012 R2:

In addition, ALPHACAM 2012 R2 contains a number of Graphical User Interface enhancements, along with modifications to make the software easier to use.