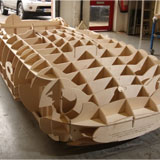 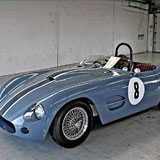 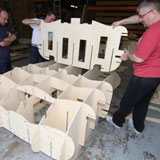 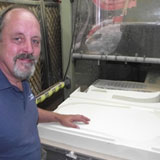 The Buck Stops With ALPHACAM

A wooden buck was an essential factor in the success of a specialist one-off racing car. And the Cambridgeshire  company that produced it says it was a real case of wood ensuring that metal can do its job properly.

Andy Mitchell, proprietor of Mitchell Motors in Wiltshire, wanted a unique car in the spirit of a 1950s classic racing car which he could use both on the road and on racing circuits. He came up with the Mitchell Special MK 11, based on a shortened version of the box-section Bristol chassis, but with a new spaceframe of his own design.

Once the body shape had been finalised following extensive CAD work, he called on dedicated CNC routing specialists The Cutting Room to create the wooden former for proving out the metalwork.

In a bygone racing era, Italian craftsmen at Touring, Zagato and Scaglietti would have painstakingly hand-crafted a full-sized wooden body buck from solid elm to help their metalworkers form the finished bodywork for their cars. But instead of having to hire such skilled specialist workers, Andy Mitchell only had to email his CAD file to The Cutting Room, based at Huntingdon, and within 36 hours they had produced the birchwood ply profiles, using ALPHACAM to create the toolpaths.

The profiles fitted together to form the rigid 3D former, to which the panel beater could offer up each metal sheet as it came off the wheeling machine to eliminate any uncertainty over whether corners matched, or the wheel arches and door apertures corresponded.

A wheeling machine enables a metal craftsman to form double curvature curves from flat sheetmetal. Panels produced this way are expensive, but it has the key advantage that it can flexibly produce different panels using the same machine. It is used wherever low volumes of compound curved panels are required; typically in spaceframe chassis racing cars such as the Mitchell Special, car prototypes, car restoration, coachbuilding and aircraft skin components.

To keep costs to a minimum, it was essential that the bodywork was absolutely right first time, and this was where the accuracy of the wooden buck came in. Cutting Room partner Mark Durey (pictured left) says: “Without the buck the car could not have been made to the high standard it was. So the buck had to be absolutely perfect. It’s formed through 2D interlocking cuts, and we had to put in a vertical slice wherever it was needed, creating a cross hatch. We had to make sure all the joints were correct and that only one edge of the board would touch the metal’s surface smoothly.”

Once The Cutting Room had received Andy Mitchell’s CAD file, they used ALPHACAM to nest the profiles on sheets of birchwood ply and create accurate toolpaths. But Mark Durey says ALPHACAM’s role did not end there. “We used ALPHACAM’s tagging facility on some of the smaller parts, raising the cut to hold the components steady, like Airfix parts are held in place. Although we were creating a lot of small parts, tagging effectively makes them one large part, ensuring absolute accuracy and increases the cutting speed.”

The profiles were machined on an Anderson Duo (pictured, right) – one of The Cutting Room’s three CNC routers; the others being an SCM Record 220 and SCM Routomat 3.  Each piece of the plywood assembly was numbered and coded so the buck could be disassembled for storage, or packed flat and transported at minimal cost. The buck also gives an accurate pattern which can be used in the future if the car ever suffers accident damage.

When The Cutting Room got their first CNC router they were putting the code in by hand and working out the dimensions on graph paper. “Then I saw how ALPHACAM would be ideal for putting our toolpaths in, so I bought it straight away. That was about 20 years ago, and I’ve used ALPHACAM ever since as it’s absolutely the best software for our needs,” says Mark Durey.